How Apollo helps you go from zero to production with GraphQL

Apollo is an implementation of GraphQL designed for the needs of product engineering teams building modern, data-driven applications. It encourages an agile, incremental approach and takes special care to avoid requiring any changes to existing APIs and services. Apollo puts particular emphasis on tooling and workflows.

Apollo is best used as a new layer in your stack that sits between your services and your applications. It's a combination of open source components, commercial extensions, and cloud services. The major pieces are: 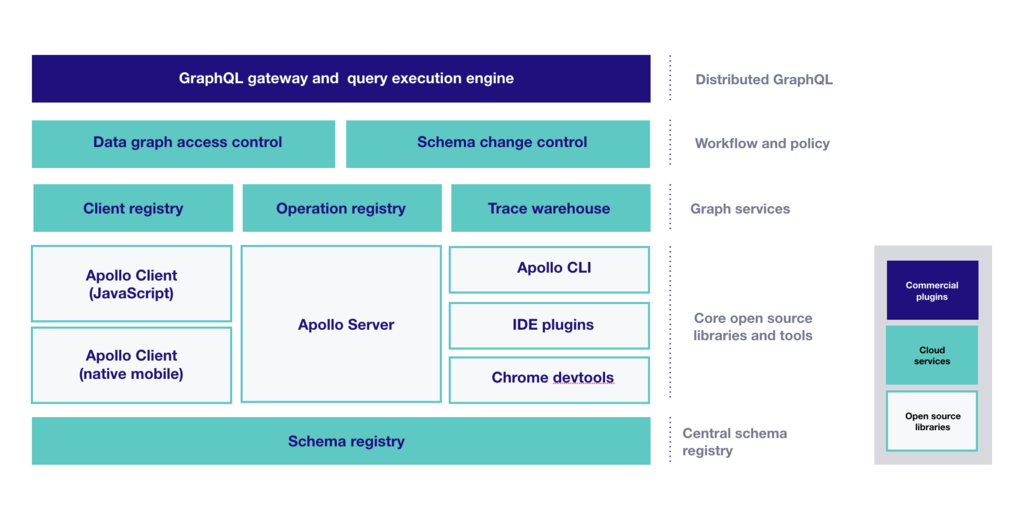 On top of these components, Apollo implements some useful workflows for managing a GraphQL API. Each of these workflows makes use of several different parts of the platform, working together. Some examples are:

Apollo includes a facility for checking the compatibility of a given schema against a set of previously-observed operations. This uses the trace warehouse, operation registry, and (typically) the client registry. As an example, an operation that references a missing field or an operation that doesn't pass a required argument to a field would cause an incompatibility error. The compatibility check runs statically, taking advantage of the schema's type definitions, so it doesn't require a running server.

Apollo provides an end-to-end mechanism for safelisting known clients and queries, a recommended best practice that limits production use of a GraphQL API to specific pre-arranged operations. There are two parts here. First, the Apollo CLI extracts all the queries from a client codebase, computes the over-the-wire subset of the query (stripping out the part that references the client's local schema), and stores it in the operation registry. Separately, an Apollo Server plugin synchronizes the list of pre-registered operations to the server, which then rejects queries that aren't present in its local copy.